By Helen Roberts on April 16, 2016 in Crumble Projects

This challenge involves making a reaction timer game with a Sparkle Baton. The aim of the game is to press the button when you see a green light. We used: 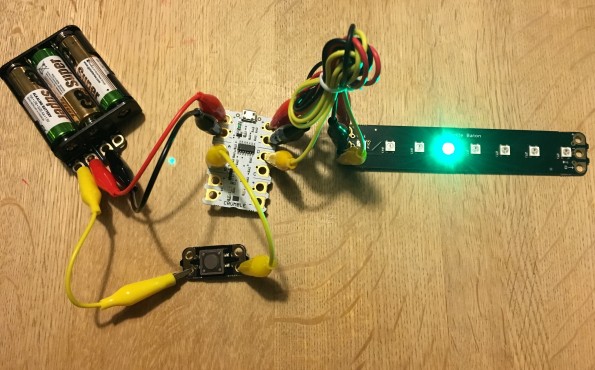 The program was developed and refined in several stages. First, I wanted a lit LED to “travel” backwards and forwards along the Sparkle Baton: 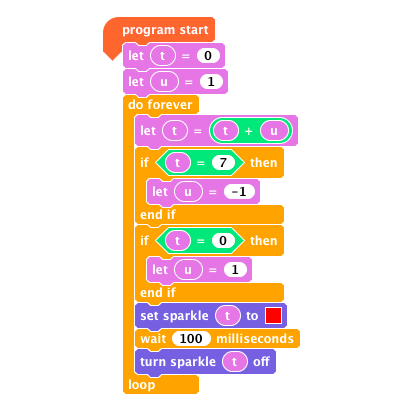 The variable “t” is the index number of the Sparkle. The variable “u” switches between +1 and -1 every 8 steps, so the “let t=t+u” command increments the Sparkle number from 0 to 7 then decrements it back to 0. At each step, Sparkle “t” is set to red for 100 milliseconds. This whole sequence is placed inside a “do forever” block.

Now, as the red light travels back and forth, we want just one of the Sparkles to turn green, instead. The “set sparkle ‘t’ to red” block is, therefore, replaced with an if-else statement, which changes Sparkle number 3 to green: 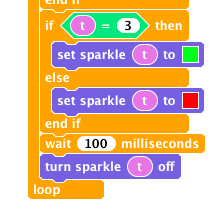 The program now needs to respond to user input: the aim is to press the button when you see the green light. Inside the “do forever” loop, we nest a “do until B is HI” loop. 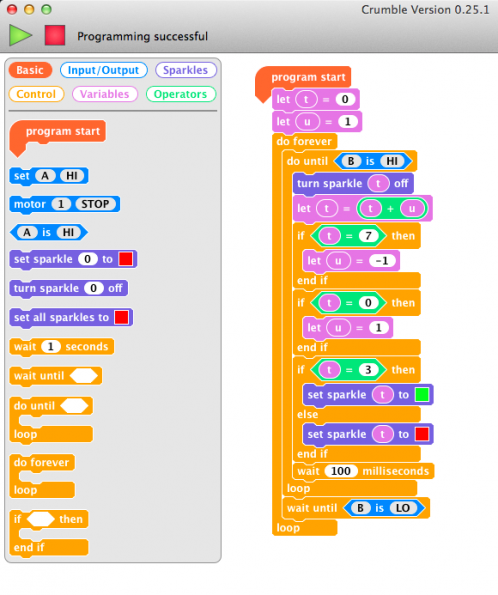 When the button is pressed, the program will pause until it is released (“wait until B is LO”). If the user has succeeded in pressing the button when the green LED is lit they have “won”.

In order to emphasize this, a “victory flash” is now inserted: if “t=3” when the button is pressed (i.e. if the Sparkle is green) then all the Sparkles flash green 3 times before the program continues. 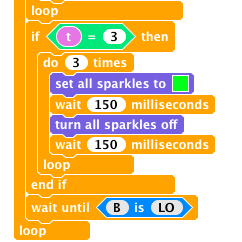 In order to increase the challenge, a variable “time” was created, which determines how quickly the Sparkles turn on and off. Initially, this is set to 300ms and it decreases by 50ms for each successive “correct” push of the button. If the button is pressed at the wrong time, however, the time is reset.

Can you improve on the game? Ideas: 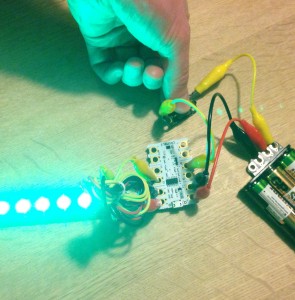 At full strength, the Sparkles are too bright to look at for long periods of time. When writing and debugging programs using Sparkles I usually cover them with (e.g.) one or two sheets of paper.